Our arrival in Tashkent was a little bit tense. Daniel did read on the Internet plenty of awful stories about the passport and the custom controls. Fortunately, Magali was here to keep him calm. The result was the most quick and hassle free border crossing we had so far. No one asked us about the pictures and videos we were having in our phones and laptops and about all the medicines we were carrying. If you feel stressed up ike Daniel about these controls, we strongly advise you to take a flight from Almaty (or any airport with a connecting flight). The airport border is way easier to cross than the land border.

Tashkent is a big modern and extremely clean city. There are a few sights to see. Among them, the Chorsu bazar is worth the detour. From mutton kidney to wedding dresses, you can find whatever you need there. And most importantly you will find plenty of Uzbek currency. The government is artificially maintaining an exchange rate of 1$ for 3’000 soms (the local currency). This artificial rate led to a huge black market. The black market rate is 1$ for 6’150 soms. Suddenly your travel will cost you half less. And everybody is using the black market. The money changers do not hide from you. When we asked around, every body told us it is safe.

After two nights in Tashkent, we flew to the other side (West) of the country, namely the city of Khiva. This is where the historical adventure begins. The citadel is composed of a dozen of madrasas, a few minarets, a few mosques all connected with pedestrian paved streets. You really feel either like 200 years ago or on the set of a Sharazad themed movie. Khiva was also the place were the heat hit us the most (with a maximum between 45 and 50 degrees). Only travel warriors (a category we don’t belong to) can visit sights all day long. We chose instead the visit / nap with air conditionning / visit routine. 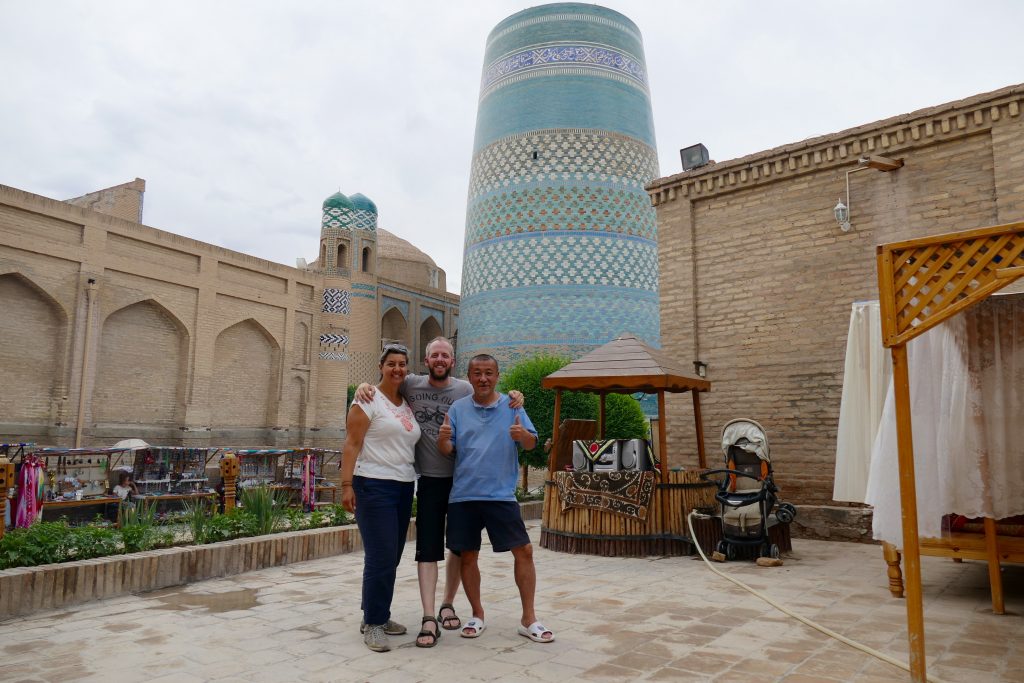 Near one of the citadels in the desert

Riding rented bicycles in the citadel of Khiva. It was a long time since we enjoyed a place where cars are prohibited.